VANCOUVER, Wash.— Former prisoner of war Jessica Lynch will share her experiences overcoming obstacles and the important role of education with the Clark College Class of 2016 as the college’s Commencement keynote speaker on June 16.

“Jessica Lynch is a wonderful example of how strength of character can help people survive the hardest of situations,” said Clark College President Robert K. Knight. “I believe she will make a strong connection with our students.”

Clark College’s Commencement ceremony is scheduled to be held on the evening of June 16 in Sunlight Supply Amphitheater. Tickets are not required to attend. 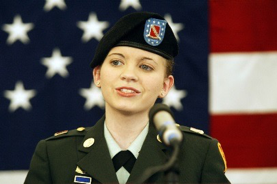 Jessica Lynch is a former Private First Class (PFC) in the United States Army and a former prisoner of war. On March 23, 2003, she was injured and captured by Iraqi forces after her unit was ambushed in Iraq. She was rescued after nine days in captivity on April 1, 2003, by U.S. special operations forces. Lynch’s rescue was the first successful rescue of an American POW since World War II.

Today, Lynch speaks to various groups around the United States about overcoming her obstacles and how perseverance helped her survive. Lynch further explains that despite the most difficult circumstances – whatever they might be – a positive outlook and determination can truly help individuals live fulfilling lives and accomplish their goals.

Jessica has appeared on Good Morning America, Today Show, CBS Morning Show, Huckabee Show, CNN, MSNBC, David Letterman Show, Fox, Prime Time on ABC with Dianne Sawyer, E News!, CBN, and various local networks throughout the country. She has appeared on the cover of numerous magazines such as TIME and People. She has been named West Virginian of the Year as well as Glamour’s Woman of the Year.

A large version of this photo is available at http://premierespeakers.com/client/media_kit/7372f634f738.