Walter (full bio below) will read from some of his works and discuss his writing process from 1:00 p.m. to 2:00 p.m. on Wednesday, February 11, in Foster Auditorium on Clark's main campus. The event is free and open to the public. Directions and maps are available online. Individuals who need accommodation due to a disability in order to fully participate in this event should contact Clark College’s Disability Support Services (DSS) Office at 360-992-2314 or 360-991-0901 (VP). The DSS office is located in room 013 in Clark’s Penguin Union Building. 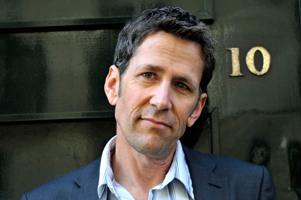 A former National Book Award finalist and winner of the Edgar Allan Poe Award, Jess Walter is the author of six novels, one book of short stories, and one nonfiction book. His 2012 novel, Beautiful Ruins, was both a No. 1 New York Times Bestseller and a New York Times Notable Book of 2012, as well as Esquire's Book of the Year and NPR Fresh Air's Novel of the Year. His 2009 novel, The Financial Lives of the Poets was Time magazine's No. 2 Novel of the Year. His most recent book, the 2013 collection of short stories called We Live in Water, was described by the Seattle Times as "[s]tories that twist and plumb, delivering unexpected laughs while playing with what it is we think we know ... Walter has emerged as one of the country’s most dazzling novelists ... so freakishly, fiendishly good, it isn’t fair."

Walter's work has been translated into 30 languages, and his essays, short fiction, criticism and journalism have been widely published, in Best American Short Stories, Best American Nonrequired Reading, Harper's, Esquire, McSweeney's, Byliner, Playboy, ESPN the Magazine, Details and many others. He lives with his wife Anne and children, Brooklyn, Ava and Alec in his childhood home of Spokane, Washington.

A high-resolution image of Jess Walter is available here.