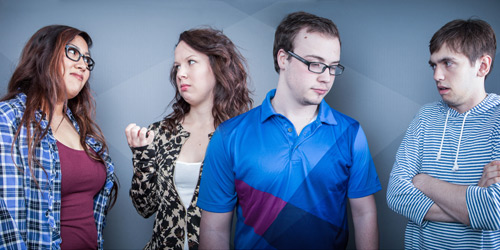 VANCOUVER, Wash. – Clark College Theatre concludes its 2013-14 season with Dog Sees God: Confessions of a Teenage Blockhead by Bert V. Royal. A breakout hit when it debuted at the New York International Fringe Festival, this challenging work operates both as a comedic deconstruction of an American icon and as a poignant examination of the hurdles facing modern youth. The production is directed by Theatre Department Chair H. Gene Biby and runs May 2-17.

An “unauthorized parody,” Dog Sees God imagines characters from the popular comic strip Peanuts as teenagers. Drug use, suicide, eating disorders, teen violence, rebellion, sex and sexual identity are among the issues covered in this drama. Royal builds on the foundation of Charles Schulz's iconic comic strip, creating a parody that's also a stand-alone play apt to resonate even with those who belong to that small population segment unfamiliar with Peanuts.

“Using iconic cartoon characters as his basis, Royal examines the big questions about life, love and the pursuit of happiness,” says Biby. “Additionally, he takes a hard look at current societal issues including bullying, drug use, and sexuality.  Royal provides a humorous yet often poignant look at our lives through the lens of these much-loved characters.”

Ticket Information: Students (with ID) $9; Alumni (with membership) $9; Senior Citizens $11; General Admission $13. Tickets may be purchased in person at the Clark College Bookstore in Gaiser Hall, online at http://www.clarkbookstore.com/site_theatre.asp, or call 360-992-2815.

If you need accommodation due to a disability in order to fully participate in this event, contact Clark College’s Disability Support Services Office at 360-992-2314 or 360-991-0901 (VP), or visit Gaiser Hall room 137, two weeks before the event.